Gas Networks Ireland covers 14,500km of gas pipelines, of which 2,200km is made up of high pressure lines.

According to Owen Wilson, the Safety Manager of Gas Networks Ireland within his article with the Independent, distribution pipelines suffer an average of 550 perforations per year.

Distribution pipelines are the yellow pipes that run under our roads and supply houses, businesses and factories and Owen indicates that contractors, builders, farmers and homeowners have close calls across Ireland every year.

Transmission pipelines carry gas across the country at pressures of up to 85 bar, which often cross farmland. A transmission pipeline has never been punctured in Ireland however GNI suffer between 40 and 55 encroachments every year, where they have come across people who are excavating close to their high pressure pipelines who haven't actually told GNI about the works.

As a result, it isn't just major building works that can result in damaged pipes, however smaller works, such as having an extension added to your home, clearing a ditch on your farm, or having work done on your driveway can also result in a service strike.

The consequences of a gas pipe strike can result in damage to property, injury and death. "If you damage a pipe, the pressure alone can be lethal," explains Owen. "Couple that with the fact that the gas within it is flammable and you can imagine the damage that it's capable of doing."

Before carrying out any work, it is essential that you check if there are gas pipelines nearby.

"Anyone digging is at risk," Owen points out.

Before starting any excavation, it is recommended that the Statutory Undertakers Records are obtained - these are maps which show if different asset holders have apparatus within the area of the excavation.

Subject to the results of this, an onsite survey may be required in order to detect and map the position, depth and type of any buried services located within the dig area.

GEOTEC Surveys Ltd use Radio Frequency Detectors (Electro-magnetic locating) in order to pick up metallic and conductive services, after which a Ground Penetrating Radar (GPR) Survey is completed in order to detect other services, such as gas and water - example below. 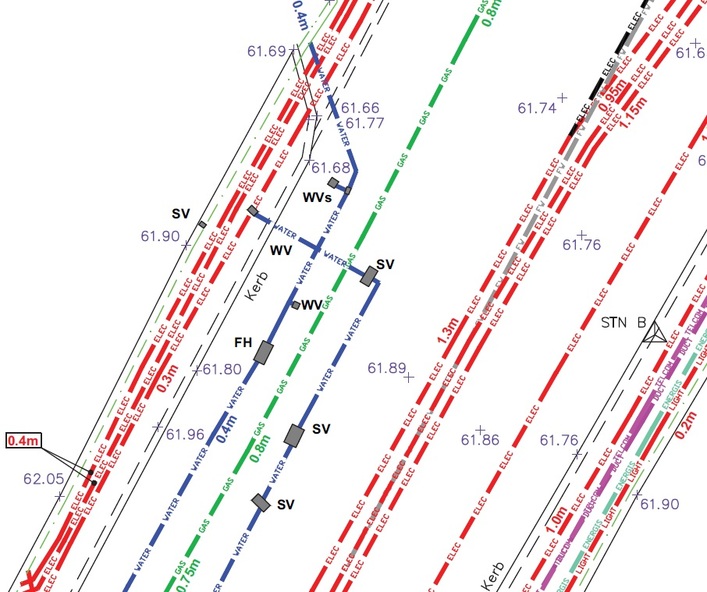