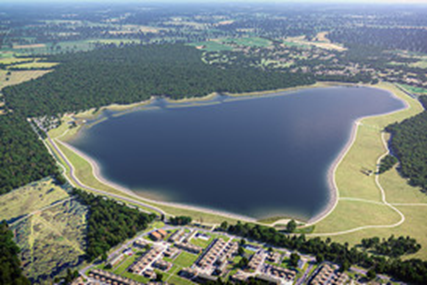 As of June 2021, plans for an 8.7 billion litre storage reservoir spanning 160 hectares in between Rowlands Castle, East Hampshire and Leigh Park in Havant has been granted permission to go ahead by neighbouring local authorities.

The detailed planning application for the reservoir, along with a separate one for the pipeline which is needed to fill and remove water to supply to customers, was considered and granted permission following hours of debate by councillors at East Hampshire District Council and Havant Borough Council.

The reservoir, a collaboration between Portsmouth Water and Southern Water will safeguard water resources for years to come for the South East.

The plan, submitted by Portsmouth Water, to build a reservoir, together with a visitor and education centre, picnic and play area, along with parking facilities for approximately 200 vehicles, has been an ambition for many years.

The reservoir, once complete, will create a permanent wetland with bird watching facilities

As part of this project, Portsmouth Water needs to lay a 3.8km pipeline from the Bedhampton Springs to fill the reservoir in the winter, the route of which is illustrated below: 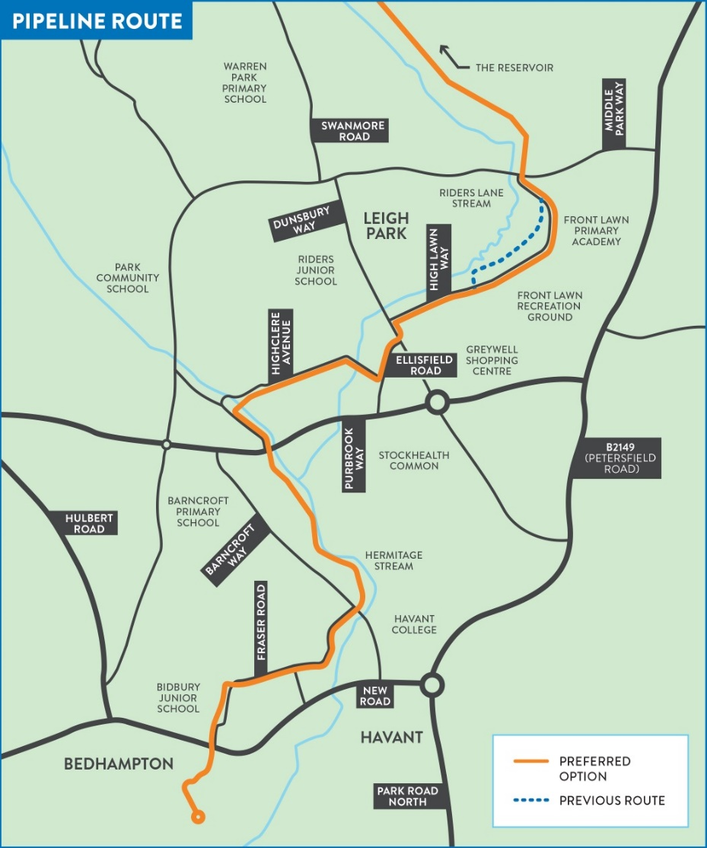 As part of this development, the pipeline design formed part of the abovementioned planning application that was submitted to East Hampshire District Council and Havant Borough Council.

The design could only be progressed once the client had an understanding as to the locations, positions, depths and types of all existing buried services and utilities which are currently buried within the roads, footpaths and green spaces along this route.

As a result of this requirement, Portsmouth Water went out to market for the provision of a utility detection survey to PAS128 and the production of accurate high quality 3D utility mapping which formed the Havant Thicket Reservoir Project Pipeline Route Utility Detection Contract.

Following the progression of the rigorous PQQ and tender stages, GEOTEC Surveys Ltd (GEOTEC / We) were successfully awarded the contract in May 2020.

A full 3D PAS 128 Survey was required within the survey area which related to the pipeline route, over a length of approximately 3.8 km, from Bedhampton Pumping Station to Middle Park Way, which sits just south of the proposed reservoir site, as illustrated below. 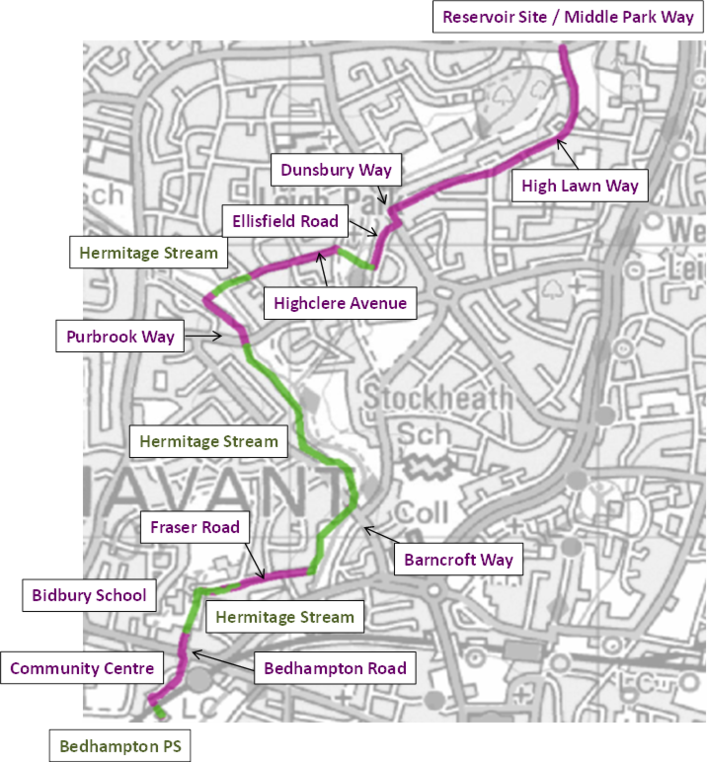 The green sections relate to green space for a 10m wide strip over the course of approximately 1,400 linear metres relating to the west side of the Hermitage Stream.

The client also increased the survey area to include an additional 800 linear metres relating to the east side of the Hermitage Stream.

Prior to starting survey works, we attended a pre-start meeting with the client to agree on a starting point and programme of works, in line with the client's tight timeframes.

We began work with Portsmouth Water's ecology department in order to ascertain what level of vegetation clearance in which locations could be achieved within the green space, with the primary objective of uncovering drainage manhole covers and the routes between them so that these lines could be surveyed to best endeavours.

As part of this work, we also worked with a Traffic Management Consultant in order to safely survey the road crossings relating to Purbrook Way, Dunsbury Way and Middle Park Way, in conjunction with the Network Planning & Administration Supervisor for Portsmouth Water.

A Streetworks Permit Plan was also submitted to the Network Planning Team relating to all roads along the route, which was approved and Streetworks Permits issued accordingly, whilst GEOTEC arranged for special signs to be made up for when works were taking place within the roads, as per the below photograph. 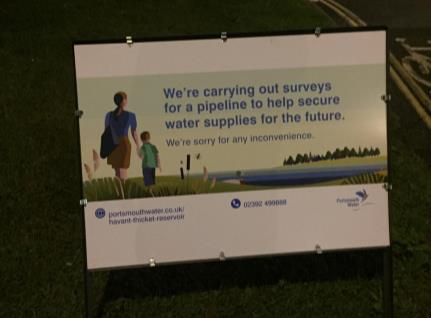 We also worked with the Portsmouth Water communications team to deliver 2x letter drops to residents informing them of a) when night time traffic management was in place and to b) kindly move parked cars so that our vehicle-mounted Ground Penetrating Radar could take place to cover as much of the site as possible, which GEOTEC delivered by hand.

In addition, a door knock was completed on the afternoon before and the morning of the vehicle mounted GPR Surveys, which took place over the course of 2x days.

Lastly, we also worked with a Confined Spaces and CCTV Survey company in order to obtain further information relating to the drainage network alongside the Hermitage Stream, which required permission to be sought from Southern Water and additional permits were approved.

The survey was managed onsite by 1x Lead Surveyor, who was responsible for the production of the 3D survey results. He was supported by 3 additional surveyors.

The survey commenced on 21st July 2020 at the southern section of the route, including Bedhampton Pumping Station, where the team were escorted, and commenced north, towards Middle Park Way.

We completed works in regards to the urban sections first and then went back to complete the green space areas thereafter, once vegetation clearance had been agreed and completed.

The road crossings relating to Purbrook Way, Dunsbury Way and Middle Park Way were completed at night under traffic management measures towards the end of the survey.

The client also added a further survey area relating to the East side of the Hermitage Stream, which was completed last, with onsite survey works finishing on 21st October 2020.

The general methodology that was adopted is illustrated below, whilst the survey team divided the site into manageable sections, as they saw fit:

We used our own Traffic Management measures, where safe to do so, with NRSWA Streetworks Trained Survey staff, at our discretion on a short term, mobile basis, to lift manhole covers, valves and gullies within the roads and trace services accordingly.

Where required, we worked with our Traffic Management Consultant to gain access to the live carriageways (at night), by way of lane closures.

Radio frequency locators were then utilised over the site in a passive sweep in both power and radio modes to establish the presence and position of any other metallic and power carrying features.

We then set out an orthogonal grid from which a series of parallel radar scans were made with a GPR system within the footpaths and green space areas, which allows detection and mapping of previously unknown services, including all non-metallic and power carrying services.

Temporary spot marking spray paint was used to spray initial findings onto the ground which were topographically recorded at suitable points throughout the survey.

Collection of all 'marked out' data including radar grid positions using a calibrated EDM/theodolite/GPS/TPSsuch that in the compilation of a drawing, all underground data can be accurately tied to a fixed above ground point.

A GPR survey of the roadways was also completed in isolation using a vehicle mounted system during normal working daytime hours, as shown below.

For drainage along the Hermitage Stream, we subcontracted the services of a Confined Spaces Entry team and CCTV Survey Specialist who assisted us in gaining additional information for this specific aspect of the survey. These manhole chambers were particularly challenging to investigate due to their dimensions, the rate of flow, their depths to inverts and position of drainage covers along the stream.

“We would like to thank the whole Geotec team for their excellent work on these surveys”.

The client provided us with the necessary statutory undertakers' records to assist us with our onsite survey works and for comparison and evaluation when producing results and allocating Quality Levels to various detected services.

The GPR data was also key in allowing us to upgrade Quality Levels from B2 to B1.

We also produced our own 3D topographical survey to act as a background which was georeferenced to existing client data.

Findings relating to the PAS 128 Survey were overlaid onto this and also presented in 3D, as per the below extract, showing the congested nature of Bedhampton Road. 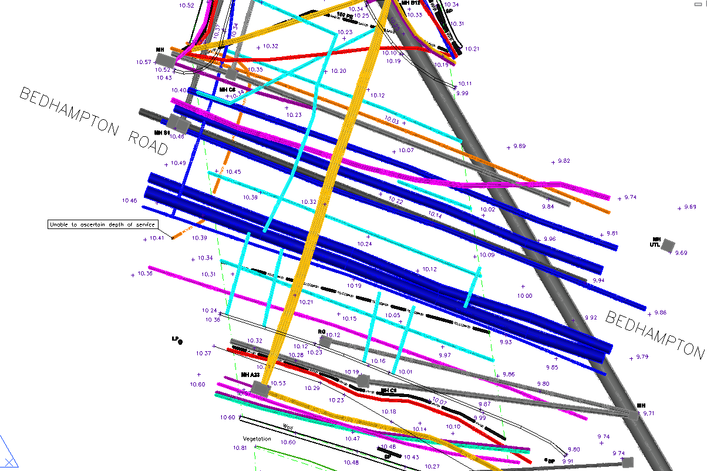 The zoomed in version also illustrates how quality levels have been indicated showing: 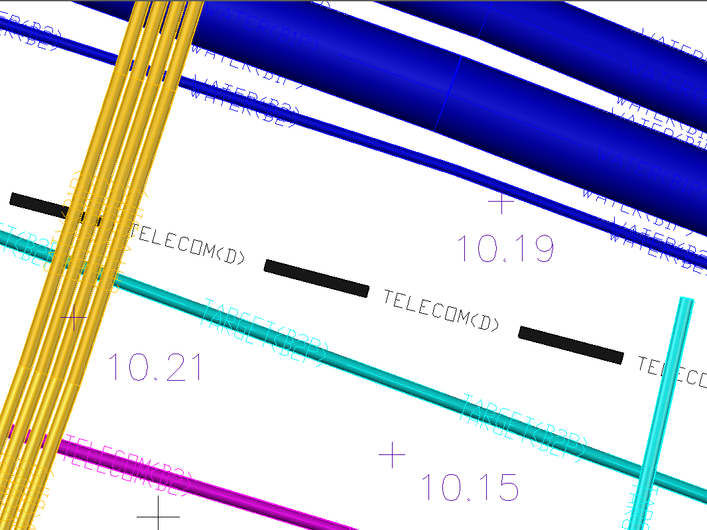 B3P = detected using either GPR or Radio Frequency, but with no depth reading available.

B4P = assumed route, not detected by either technique

D = not detected by either technique, with route indicted from Statutory Records

The telecom highlighted in black is taken from statutory undertakers records (as these were not detected onsite).

There are a number of linear GPR targets (in turquoise) which were successfully detected using the vehicle mounted & cart based GPR systems but not using EML (hence their B2P score).

A large number of services were detected to a quality score of B1P, which indicates that they were detected with both EML and the GPR, which demonstrates that this survey was completed to a comprehensive level.

There are also a number of metallic features and power features that were only detected using EML in passive modes (i.e. no access from manhole chambers or data relating to them from the GPR). This is demonstrated by a score of B2P being allocated to them.

We have not provided duct layout diagrams as the survey is in 3D.This shows that each chamber has a number of ducts, which also show that one is empty, as shown below: 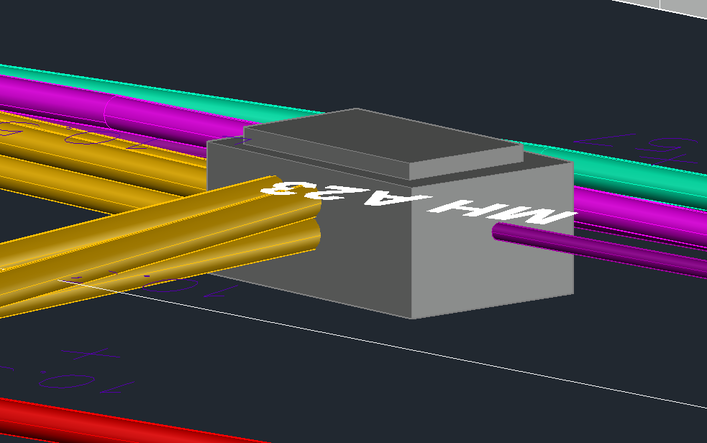 Each manhole was also given a reference number for the manhole schedule, extract below: 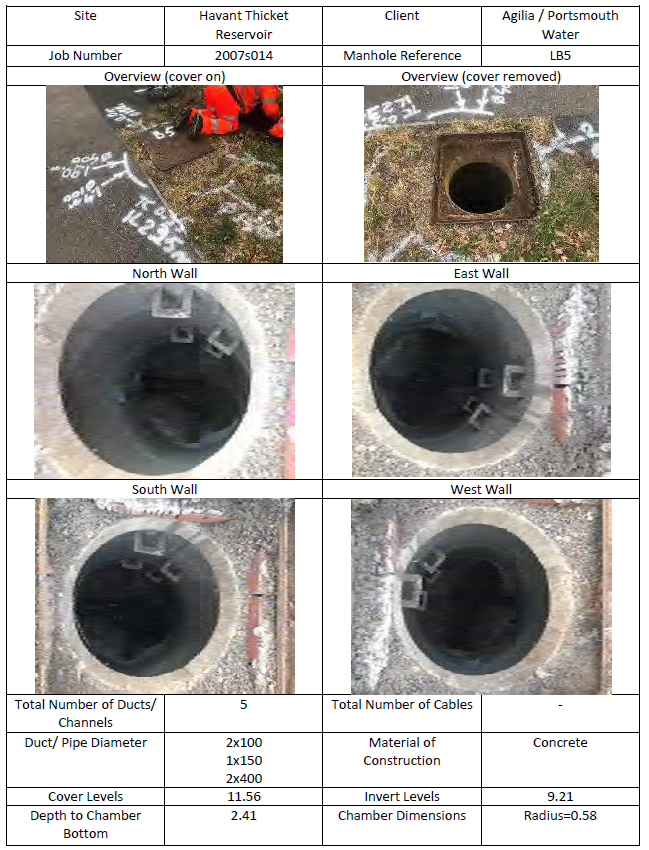 This assists the client and their designers in understanding exactly what is in each manhole or inspection chamber so that detailed designs can be put forward based on as much, accurate, information as possible.

The below extract illustrates a section of our survey results within the green space relating to the drainage onsite, much of which was excessively deep and required the assistance of a Confined Spaces Trained CCTV Survey team to assist us in extracting as much information relating to these services as possible. 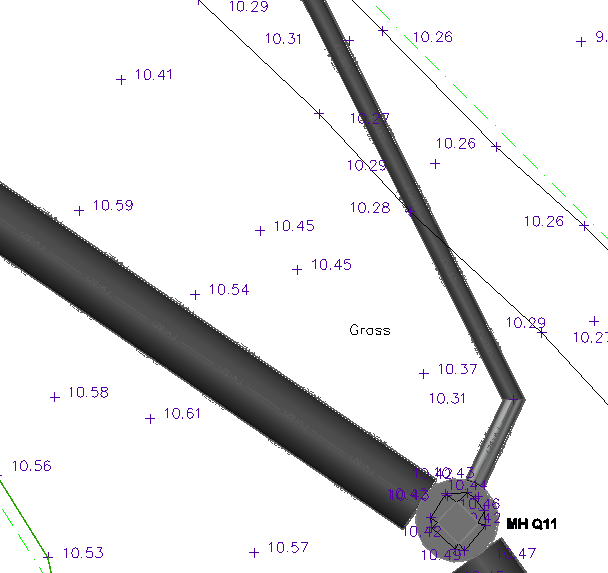 This provides a plan view as to the route and position of the drainage within the green space.

The below offers a 3D representation as to the same service, which illustrates the route of the drainage, depths of all incoming / outgoing pipes (including invert levels) and chamber dimensions more clearly than the traditional 2D output. 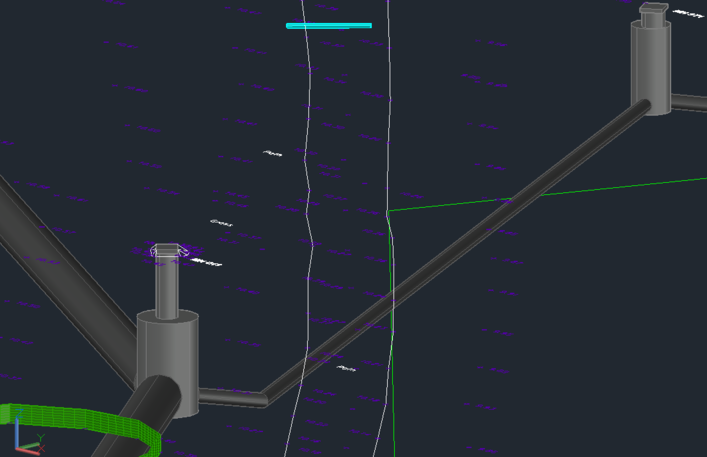 Finally, the below extract outlines the importance of the vehicle mounted Ground Penetrating Radar System (GPR) at this location as a number of targets have been detected crossing the Highclere Avenue, as well as anomalous areas (in turquoise), which may be representative of the construction of the road. 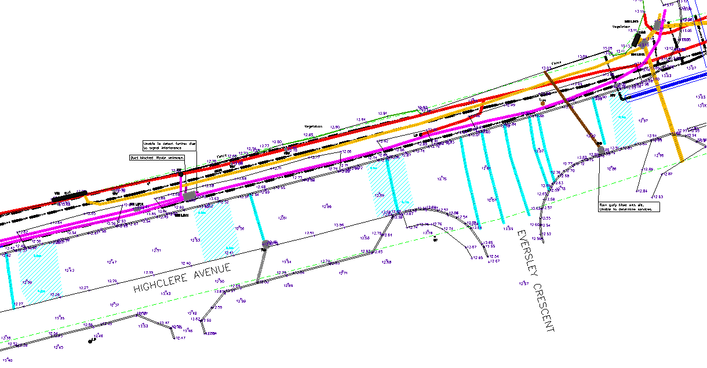 The survey results were produced in conjunction with onsite survey works by the lead surveyor on the project.

GEOTEC Surveys & Atkins (the designers) delivered a joint online presentation to Portsmouth Water on Wednesday 28th October 2020 to discuss our results and the subsequent designs which were progressed from our survey.

The decision came after councillors in neighbouring Havant Borough gave their support to the reservoir proposals on 3rd June 2021, along with plans for the reservoir pipeline.

The reservoir is due to be completed and operational by 2029.