This related to a PAS 128 Underground Mapping Survey and was required as part of the design for a large drainage & roadway reconfiguration and upgrade project within multiple city centre roads and footpaths.

Due to the size and complexity of the survey, works were completed over 5 phases:

Survey works began on Phase 1 on Monday 14th October 2019 and lasted 4 weeks, with all survey works taking place at night. We also used a week of traffic management measures to assist us in investigating manhole covers and tracing services within the roadways. 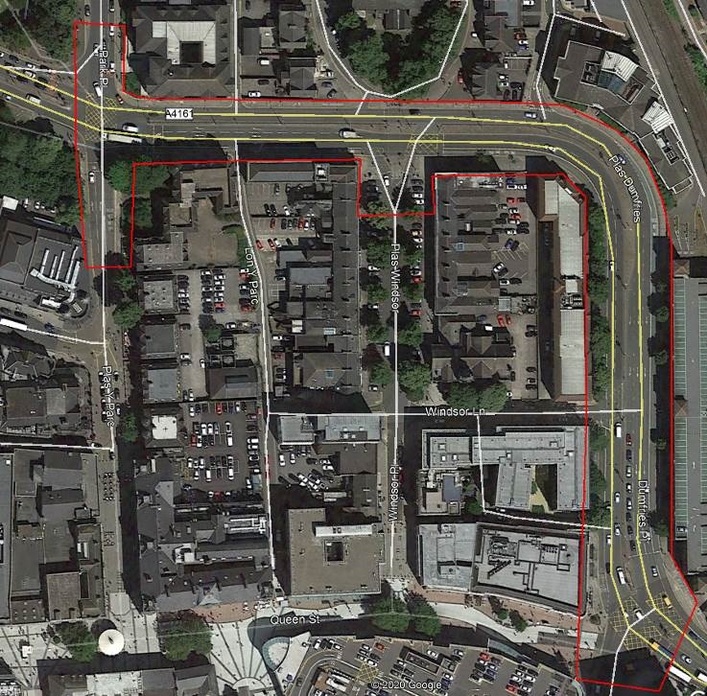 Phase 3 started on Sunday 10th November 2020 and took place over 3.5 weeks (with traffic management over the course of 1x week). This phase was brought forward to start before Phase 2 as the client changed their priority order. 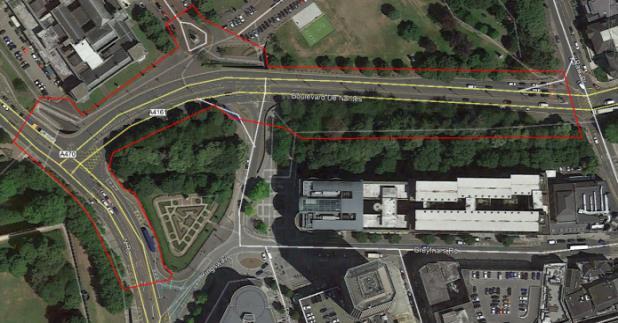 Phase 2 started on Wednesday 4th December 2019 and was completed just before Christmas. Survey results were produced simultaneously (with survey staff swapping in and out to allow results production to take place) and preliminary survey results for Phases 1-3 were submitted on Monday 23rd December 2019. 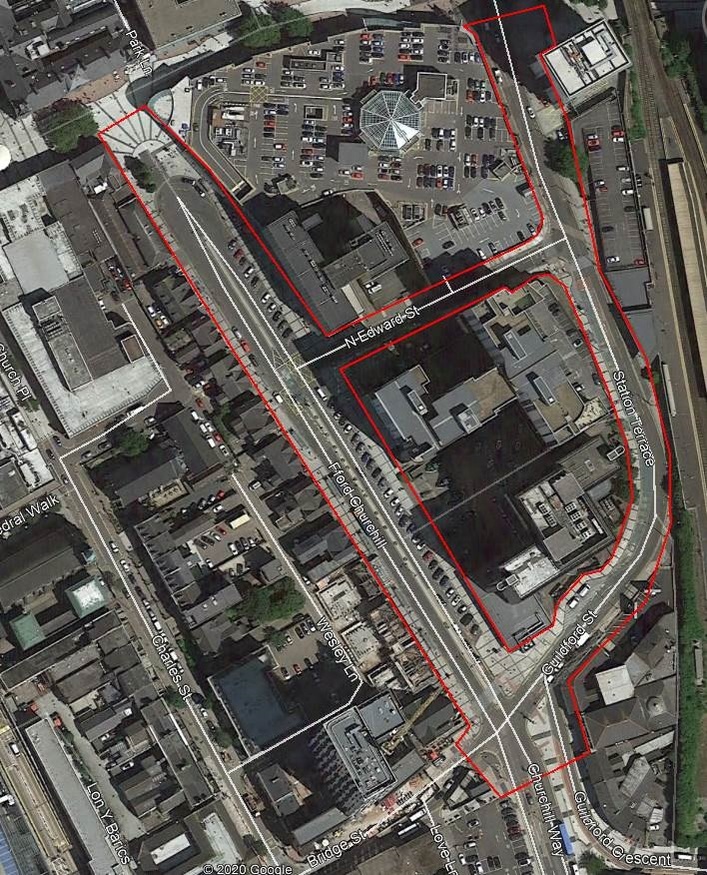 Phase 4 started in January 2020 and was completed using a mixture of a 2 and 4-man survey teams over the course of 5 day and 5 night shifts onsite. The footpaths were surveyed during the day (over reduced hours of 0930-1500) due to the volume and congestion of pedestrians. 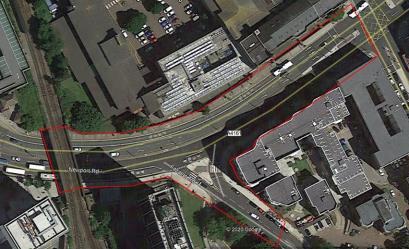 The remainder of the surveying of the footways and the roadways were completed with externally procured traffic management measures over the course of the 5 nights, with security also in attendance to protect staff and equipment from theft and anti-social behaviour.

Phase 5, below, was completed over the course of 15 day and 17 night shifts onsite with a predominantly 3-man survey team, with external traffic management measures employed over the course of 10 shifts and security for 21 shifts. The topographical survey and utility mapping was carried out simultaneously for both Phases.

Each Phase was surveyed in line with the below approach, which in turn were divided into sections:

The most appropriate way to cause as little disruption as possible, whilst still meeting the specification and scope of the PAS 128 survey was to reduce the TM required by use of such a vehicle mounted, 18 channel multi-array, GPR system that was towed from the rear of a Citroen Berlingo van on all roadways.

This was carried out during night time working hours and the van in question had TM markings (e.g. chevrons, highway maintenance sticker & flashing beacons).

In addition, an escort van was also driven behind the surveying vehicle for protection and data was collected at the same speed as traffic using each particular roadway.

The GPR data collected for the roads and the footpaths were integral in allowing us to upgrade Quality Levels from B2P to B1P and also detected the presence of a subsurface canal running beneath Churchill Way (in Phase 2).

We also procured the necessary, up to date Statutory Undertakers' Records to assist us with our onsite survey works and for comparison and evaluation when producing results and allocating Quality Levels to.

The below image is an extract taken from our survey results which clearly shows this feature (in grey), against other GPR anomalies (in turquoise). 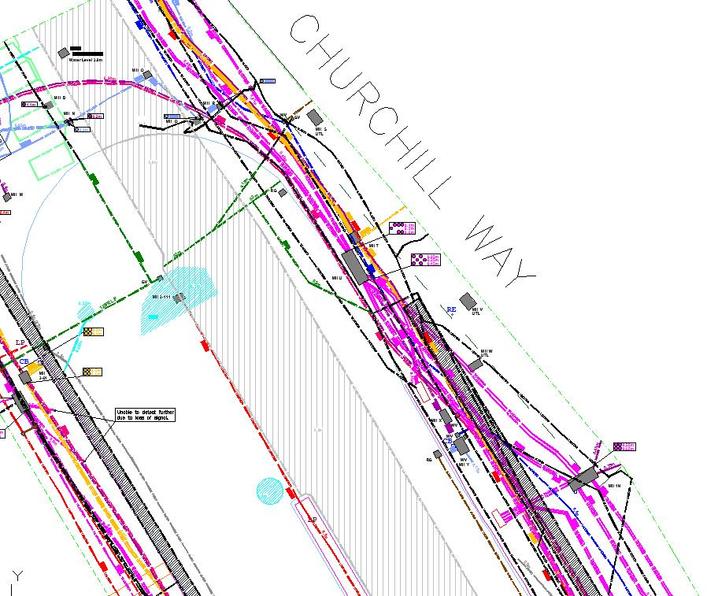 This is also visible within the raw GPR data as shown below: 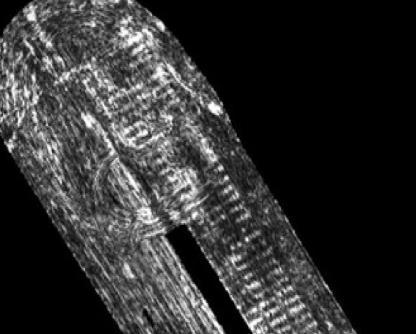 This data corroborates with an old photograph showing the construction of the culvert itself. 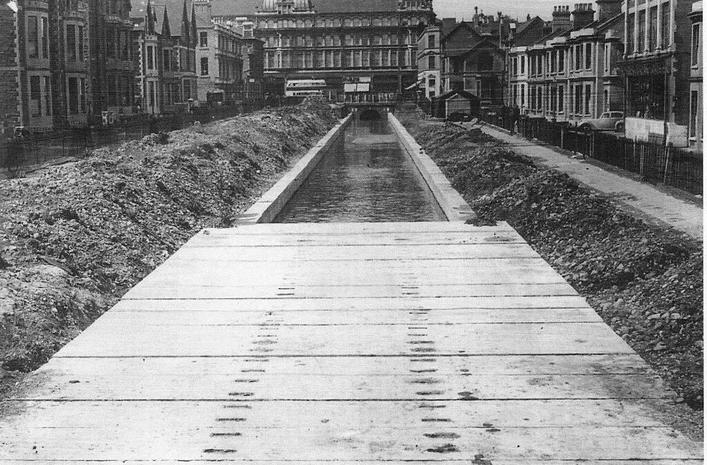 The below extract, illustrates the congested nature of the site, as taken from Phase 4 (following GPR data evaluation). This clearly demonstrates the following: 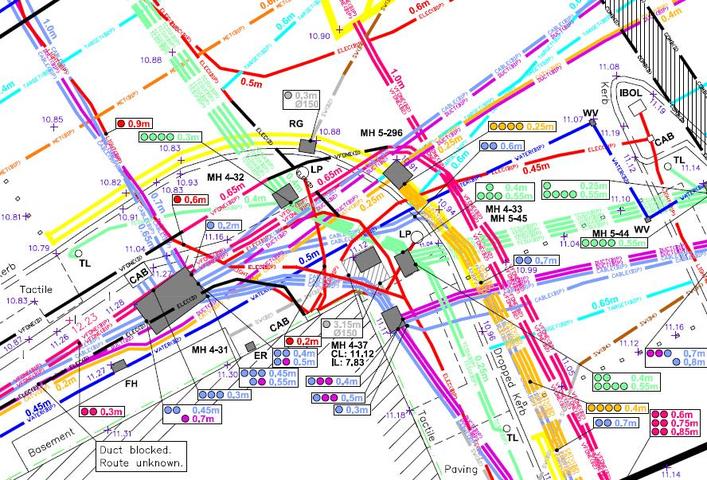 This extract is taken from a junction further from Phase 5 and whilst the congested nature of the site decreased slightly as the survey moved further away from the city centre, there was still a significant volume of services, within the survey area. 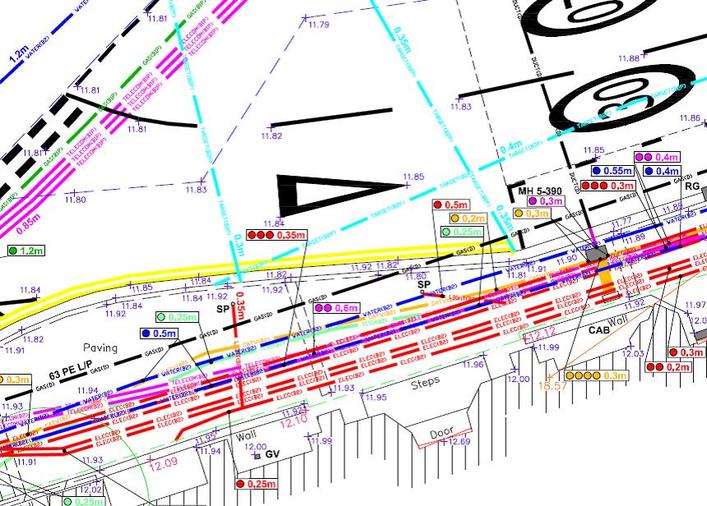 Each manhole is also referenced and an accompanying manhole photograph pack has been submitted, which also offers the client more information than they would normally have had in regards to each service.

This data allows the client to understand the confidence levels that can be placed on each utility's position and depth to allow them to design the new drainage system with a more anecdotal level of knowledge with regards to the existing utilities.

The image below illustrates the processed GPR data which is evaluated in order to provide a PAS 128 Quality Score of B1P or B2P to any given service, which can also be displayed in line with Google Earth (taken from Phase 3). This clearly shows a number of services criss-crossing the road. 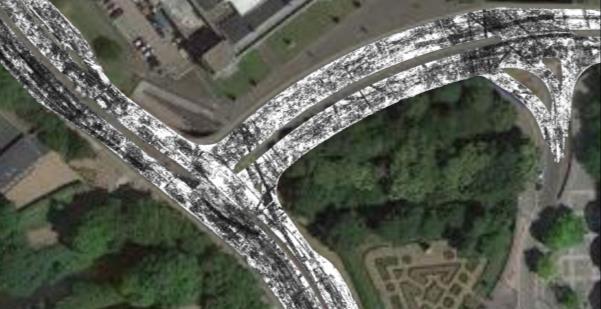 This significant undertaking represents a substantial piece of work, which demonstrates the client's approach to forward planning. This ensures that risk is reduced at design stage and assists the client in planning the project so that all known risks can be mitigated against at the earliest opportunity.