GEOTEC Surveys were contacted by Basildon and Thurrock University Hospitals NHS Foundation Trust, following a referral from the architect carrying out the design work as part of their Retail and Front Entrance Project at Basildon Hospital.

In support of the associated planning, design and subsequent construction works, a non-invasive underground mapping survey was required in order to locate and map as accurately as possible any buried known and unknown services and utilities that may be present within the proposed works areas.

This related to the access road into site and associated bus stop, as well as some adjacent car parking and a large area of raised green space. Lastly, an optional area of car parking near the maternity unit was also required.

As the survey area included the main thoroughfare into site and the Ambulance drop-off to A&E, our Senior Project Consultant, Tom Skilleter met with the client to assess how the works could be carried out safely and comprehensively in this fairly challenging environment.

This also provided us with the opportunity to confirm the client’s specific requirements and understand the various portions of the site in greater detail; such as the raised cable trough and grass bank in the middle of the site. 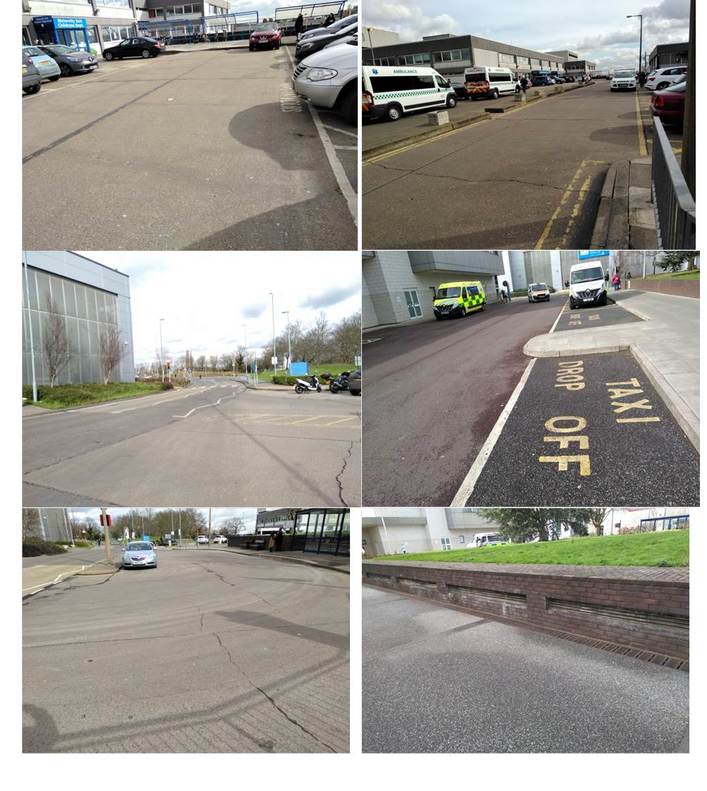 Due to the nature of the site we worked during night time working hours, when the hospital is deemed to be at its quietest. Our NRSWA Streetworks Certified Survey team still had to be mindful of patients and more importantly ambulances arriving throughout the duration of the survey.

Working at night also meant that we had to arrange a special out of hours induction with the security and facilities maintenance personnel, to allow us to start works on night 1 of this undertaking.

In addition, as we were working within the car parking areas of the site, GEOTEC and the client made arrangements to cone off various portions of the car parks for specific nights in order to provide our survey teams with a clear and unobstructed working area, whilst also maintaining the operational capacity of the hospital.

As part of site works, survey findings were initially marked on the ground using temporary spray paint for aesthetic reasons, however due to the rain, we had to revert back to contractor spray paint in some instances.

This demonstrates how we were able to work closely with our clients to ensure that the survey was conducted as well as it can be.

We carried out this physical detection survey in conjunction with statutory undertaker’s records and the clients own utility records which allowed us to produce the final survey results to the best possible standard.

In general the depth of penetration of our underground mapping survey was 2 metres from ground surface and although we did note that the grass area was raised by around a metre so it is likely that if this area has been raised subsequent to services being installed at ground level that some may be too deep to be detected.

We also understood that a heating pipe vent or duct was located within the wall relating to the raised grass area, which we surveyed using GPR in order to show the void associated with this.

A topographical survey drawing was available from the client in digital .dwg format which meant that we could overlay all findings from the underground mapping survey onto this base plan. Results were presented in 2D AutoCAD plan view pdf and AutoCAD DWG formats, with 2x hard copies also submitted, as requested.

The survey results have allowed the client to provide as much information as possible to their architects to ensure that they achieve the most economical and effective design as part of the Retail and Front Entrance Project at Basildon Hospital.

The survey indicated a number of targets located using the GPR including a larger anomaly adjacent to the building.

This indicates the services crossing the access road into site

The client has indicated that at this moment in time no works have begun in regards to this project.

This represents a typical survey whereby meeting the client prior to carrying out the works and planning the survey beforehand has resulted in an efficient and problem free undertaking. This was imperative given the environment in which this particular survey was conducted.